In 2008, a curious find was discovered down a coal mine in the Ukrainian city of Donetsk. As it could not be safely or successfully cut out due to the nature of the sandstone in which it was embedded, the mysterious artifact looking much like an ancient wheel remains in situ down the mine. The following article is extracted from The Myth Of Man by J.P. Robinson.SMXL 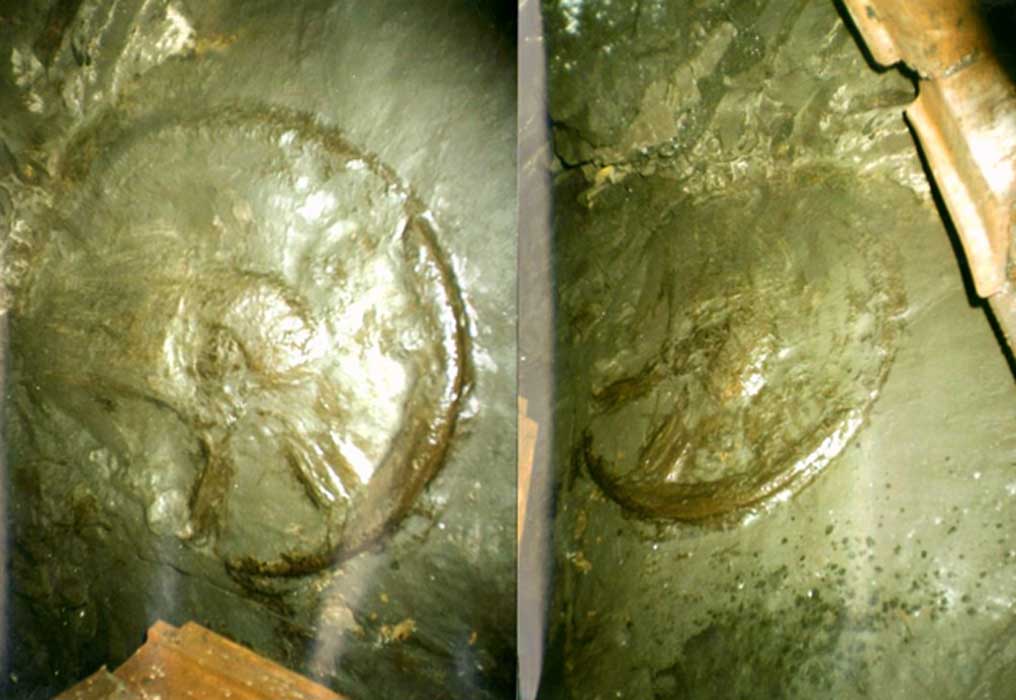 Whilst drilling the coal coking stratum named J3 ‘Sukhodolsky’ at a depth of 900 meters (2952.76 feet) from the surface, workers were surprised to find what appears to be the imprint of a wheel above them in the sandstone roof of the tunnel that they had just excavated.

Thankfully, photographs of the unusual imprint were taken by the Deputy Chief V.V. Kruzhilin and shared with the mine foreman S. Kasatkin, who brought news of the find to light. Without being able to further explore the site and inspect the imprint at close hand, we are left with only the photographs as evidence of their existence (there was more than one imprint) and the word of a group of Ukrainian miners.

Without being able to definitively date the strata in which the fossilized wheel print was found, it has been noted that the Rostov region surrounding Donetsk is situated upon Carboniferous rock aged between 360-300 million years ago, and the widely distributed coking coals have derived from the middle to late Carboniferous; suggesting a possible age of the imprint at around 300 million years old. This would mean that an actual wheel became stuck millions of years ago and dissolved over time due to a process called diagenesis, where sediments are lithified into sedimentary rocks, as is common with fossil remains.

The following is an extract from a letter written by S. Kasatkin (translated from Ukrainian) in reference to his testimony of having been witness to the anomalous wheel imprint discovered by his team of miners in 2008:

‘This finding is not a PR action. In due time (2008), we as a team of engineers and workers asked the mine director to invite scientists for detailed examination of the object, but the director, following the instructions of the then owner of the mine, prohibited such talks and instead only ordered to accelerate work on passing through this section of lava and on fast ‘charging’ of the section with mining equipment.

Owing to that, this artifact and the smaller one found during further work came to be in a tunnel blockage and could not be taken out and studied. It is good that there were people, who in spite of the director’s prohibition, photographed this artifact.

I have connections with the people who first discovered these imprints and also with those who photographed them. We have more than a dozen witnesses. As you understand, the admission in the mine is strictly limited (it is dangerous on sudden emissions) and to obtain such permit is rather difficult.

The ‘wheel’ was printed on sandstone of the roof. Guys (drifters) tried to ‘cut away’ the find with pick hammers and to take it out to the surface, but sandstone was so strong (firm) that, having been afraid to damage a print, they have left it in place. At present the mine is closed (officially since 2009) and access to the ‘object’ is impossible - the equipment is dismantled and the given layers are already flooded.’

Evidence for the existence of wheeled vehicles in antiquity has surfaced in other parts of the world, as petrified ancient tracks found in France, Spain, Italy, Malta, Kazakhstan, Ukraine, and even North America reveal. A prehistoric site known formally as Misrah Ghar il-Kbir meaning the Great Cave in Maltese (and commonly referred to as Clapham Junction), is located at Siggiewi, near the Dingli Cliffs in Malta.

It is at this now famous site that what have been termed ‘cart ruts’ cut into the limestone have mystified all that have visited the area. Likewise, a number of unusual tracks in stone are also visible on the island of Sicily at the Greek amphitheater called the Great Theater of Syracuse. Interestingly, most archaeologists have suggested that the Maltese tracks were probably created by Sicilian settlers who traveled to Malta around 2000 BC at the start of the Bronze Age.SML

Yet more tracks are to be found in Turkey. Some at Sofca cover an area roughly 45 by 10 miles (72.42 by 16.09 km), and also in Cappadocia, where several pockets of tracks can be seen. The many ruts discovered around the world have caused a great deal of controversy as to their purpose, age, and origin. These mysterious factors remain up for debate, but due to the association and close proximity with megalithic structures, in Malta particularly, and due to the fact that many tracks are now submerged below the sea in that region, many researchers have concluded that the fossilized lines show signs of great antiquity. 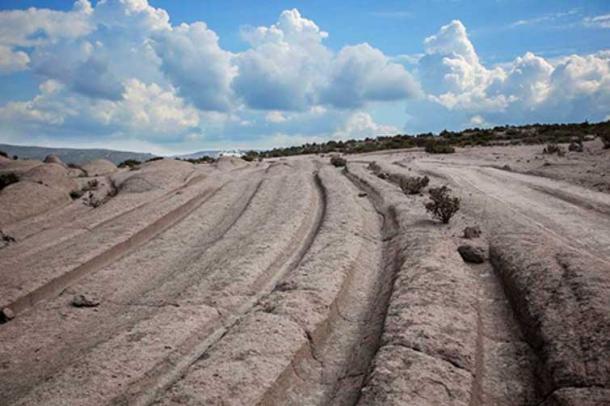 Bizarrely, considering the anomalous wheel print discovered in Ukraine that we have just discussed, a medieval city-fortress in the Crimean Mountains of Ukraine called Chufut-Kale lies in ruins, but also plays host to a number of cart ruts in stone like those at the nearby site of Eski-Kermen.

Dr. Alexander Koltypin is a geologist and director of the Natural Science Research Center at Moscow’s International Independent University of Ecology and Politology. He has spent a great deal of time visiting these sites and comparing them to one another in search of similarities.

“I first saw tracks in stone - fossilized car or terrain vehicle traces (usually called cart ruts) on Neogen plantation surface (peneplene in Phrygian) plain in May 2014 (Central Anatolia Turkey). They were situated in the field of development of Middle and Late Miocene tuffs and tuffites and according to age analysis of nearby volcanic rocks, had middle Miocene age of 12-14 million years,” wrote Koltypin.

This particular region which Koltypin has researched further is relatively unknown and the guide books offer nothing in the way of information. Whilst orthodox researchers claim that the tracks are simply the remnants of old petrified cart ruts from the kind of wheeled vehicles which donkeys or camels would have pulled, Koltypin has other ideas. “I will never accept it,” he explained when confronted with the standard explanations. “I myself will always remember . . . many other inhabitants of our planet wiped from our history.”

Indexed and Archived from Ancient Origins by Dragonfly Kingdom Library

Oops, you forgot something.

The words you entered did not match the given text. Please try again.